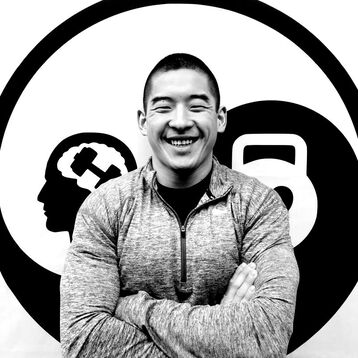 Justin has been involved in the field of fitness, strength and conditioning and rehabilitation for over a decade.  As a former high school rugby, football and CIS football player, Justin has always been a strong proponent of utilizing strength and conditioning in order to complement performance in sport.​  Combining his background with his several years experience working alongside renowned research scientists, expert clinicians (athletic therapists, physiotherapists, chiropractors and orthopedic surgeons) and having learned from Canada's most experienced Reconditioning specialists, Scott and Jaime Livingston, Justin's goal is to provide a well-rounded program that's aim is to achieve wellness and longevity through movement, intensity and variety.
​
Justin has previously worked as a strength coach at the CIS level and has trained athletes who have gone on to play in the NFL, NHL, OHL, NCAA and CFL; athletes who have represented Canada at the Olympics in curling, sailing and women's hockey; and a medallist at the 2015 Pan American games in sailing.  Justin has also worked closely with athletes from the Barrie Minor Hockey Association, Barrie AAA Colts, Barrie OHL Colts, Barrie Women's Hockey Association, Barrie Trojan Swim Club, Barrie Soccer Club, Barrie Minor Baseball Association, Innisfil Minor Baseball Association, Barrie Elites Volleyball Club, Barrie Royals Basketball and many more.

​Having worked with many athletes spanning a variety of different sports and levels as well as patients rehabbing a multitude of different injuries, his adaptability to each unique individual is what sets him apart from others.  In 2019, he founded The Movement Headquarters Inc., utilizing his background to create a fitness experience suitable for everybody. 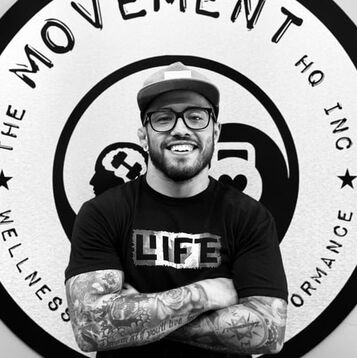 Jordan Ford
​Strength and Conditioning Coach
Jordan brings with him ten years of experience in the fitness industry as a Certified Personal Trainer, sports performance specialist, and group fitness instructor. He has a background as a former and current competitive rugby player, mixed martial artist, hockey player and Olympic weightlifter. Jordan has a real passion for fitness and developing a positive mental attitude. Having gone through his own personal extensive transformation in the past, his experiences and professional training have led to his passion and specialization in physical and mental coaching. Jordan has not only built his reputation on helping clients to achieve their desired results, but also in helping them to take control of their mindset, and in turn, their lives. His outgoing personality also comes with a great work ethic and a “won’t quit” attitude, which are attributes that are frequently shared and conveyed by the clientele who work with him.

Outside of fitness and sport, Jordan is a family man who enjoys staying active and always challenges himself and those around him to become the best versions of themselves.

Dr. Kyle Uttley is a Chiropractor and Strength and Conditioning Coach who truly believes that movement is medicine. His diverse education has allowed him to specialize in active rehabilitation and he has a desire to work with all types of active people from elite performance athletes to those seeking general physical wellness. Throughout his clinical education he has worked with a variety of both professional and recreational athletes. Kyle currently coaches group classes as well as personal training and has a desire to help everyone enjoy fitness and a healthy lifestyle. When he is not in the clinic or the gym he spends all of his free time outdoors enjoying outdoor sports of all kinds.

David Emond
Strength and Conditioning Coach
Dave is a pain and rehab clinician at Impact Healthcare, and has worked over 8 years in the field of strength and conditioning, training a large variety of athletes ranging from weekend warriors, to professional hockey players. He is passionate about getting more people moving as a way to reach their goals, both in the realm of pain and rehabilitation, as well as lifestyle, fitness and sports performance.

Whether he is in the clinical setting, or in the gym, Dave tries to take a person-centered, evidence-based approach to programming and care. This means building positive relationships, working together as a team to reach goals, and always promoting a positive learning environment. He is a former junior hockey goaltender, recreational powerlifter, and is a believer in the notion that you can’t go wrong getting strong. In his spare time, he can also be found writing and performing music, cheering on the Toronto Maple Leafs, and working with his educational start-up ARME, providing free learning resources for anyone and everyone.